The upland – acid coal swamp transition 325 – 350 million years ago  exposed in the sea cliffs of S.E.Scotland . What have clays to tell us? 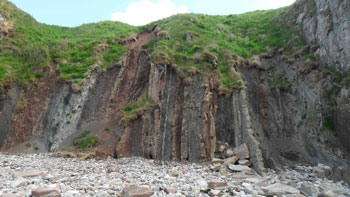 The Old Red Sandstone is a continental red bed facies of mainly Devonian age [418-359 Ma].  It consists largely of red fluviatile and aeolian sandstones interbedded with thin mudstones and is associated with localised, mainly basaltic volcanism. The upper division of this upland  continental facies is early Carboniferous in age. At the top  it passes by transition and  by intercalation of new lithologies into the typical perimarine and shallow marine Carboniferous facies of limestones with  coral reefs interbedded with brackish water  mudstones and marlstones, and palaeosoils with rootlet beds and coal seams—representing deposition in an equatorial setting affected by basaltic volcanism.  This transition [Cementstone Formation] is exposed spectacularly in the sea cliffs between Edinburgh and Berwick- on-Tweed to the south. It has recently become particularly important for paleontological reasons as there is evidence that preserved in the sediments of this perimarine environment are the traces left by the first primitive amphibians that had developed from fish-like forms.

The aim of this excursion are two-fold: First, to demonstrate the relationship between the clay mineral assemblages of the different lithologies in this perimarine transition zone between  the upland red bed facies and the marine facies and to discuss its significance: Second, to sample the spectacular scenery with its little fishing villages along the south east coast of Scotland. 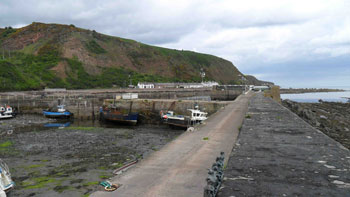 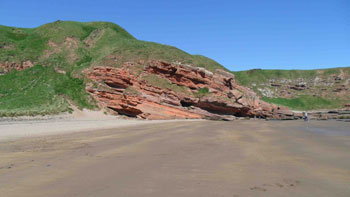 Cove  Pleasant ?45 minutes walk along the cliff top from Pease Bay with good views out to sea as well as Old Red Sandstone and Carbonifierous sediments exposed in the cliffs and fore shore. Weather dependant. 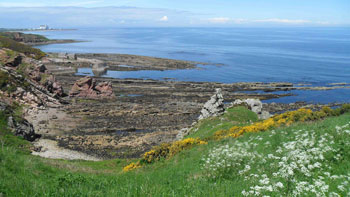 Catcraig, Dunbar. Coastal and foreshore exposure of the brackish and marine rocks of the Carboniferous with well developed coral reefs and soil beds.