The field trip will focus on visits to sites of historical interest that were involved in the work of James Hutton, who is widely regarded as the founder of modern geology. Hutton was deeply involved in the intellectual ferment that took place in Scotland in the mid and late eighteenth century, which is now known as the Scottish Enlightenment, a period that saw major advances of great significance in the arts, commerce, industry and science. 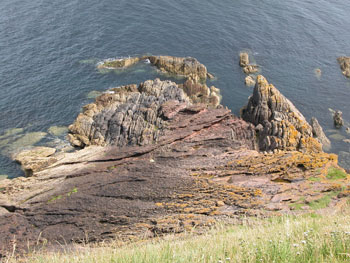 Although Hutton originally studied medicine, his major interests were in the realms of geology and agriculture and it was during his time as a practising farmer that he developed his “Theory of the Earth”, which basically anticipated what today is known as the “geological cycle”, where geological processes involving weathering, erosion, sedimentation, lithification by heat and pressure and finally uplift were envisaged as occurring in a recurring and cyclical manner. At some stage, such a cycle would evidently result in the formation of tilted strata, following uplift and earth movement, overlain by horizontal or gently dipping strata, following renewed weathering, erosion and sedimentation. Hutton spent some time searching for such “unconformities”, and succeeded in finding several convincing examples, the most famous of which is to be seen at Siccar Point, where gently dipping Upper Old Red Sandstones directly overlie near vertical Silurian greywackes. The implication of such an occurrence was that immense periods of time would be required to bring about such unconformities, certainly very much longer than the six thousand years proposed by interpretations of Scripture.

With the advantage of modern geochronology, we now know that the time gap between the Silurian and Upper Devonian sediments exposed at Siccar Point is about 55 million years, amply justifying Hutton’s famous poetic phrase that the processes of the geological cycle show “no vestige of a beginning-no prospect of an end”.

The excursion will visit the following sites.

If you are participating in the James Hutton trail field trip, you might like to download these IPhone or Android Apps and try them out on the soils farmed by James Hutton.

The Soil Carbon App can be used to assess soil carbon content, while SIFSS (Soil Indicators for Scottish Soils) is an App that allows you to find out what soil type is in your area, to explore the characteristics of around 600 different Scottish soils, to discover the differences in soil characteristics between cultivated and uncultivated soils and to examine a range of key indicators of soil quality.