Dob's Linn is a spectacular gorge and waterfall about 19 km north-east of Moffat which is around 80 km south- west of Edinburgh. It lies in the central Southern Uplands and is an east–west faulted inlier of Upper Ordovician/Lower Silurian Moffat Shale with the Llandovery (Lower Silurian) Gala and Ettrick groups.  The easily accessible gorge is cut into the well exposed and almost continuous sequence from the Caradoc to Llandovery and is abundantly fossiliferous. 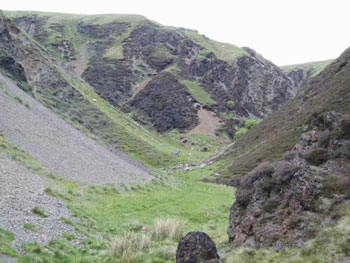 The area was first studied by Charles Lapworth in the 1860’s and 1870’s.  Lapworth was the first geologist to recognise the changes in graptolite assemblages throughout the sequence of exposed shales.  The results of his work, published in 1878, established the importance of using graptolites to understand the stratigraphic sequence and structural complexities of the Southern Uplands. Following this seminal work, graptolites have become one of the most important zone fossils for correlating Ordovician and Silurian rocks the world over.

In 1984, Dob’s Linn was formally announced as the Global Boundary Stratotype Section and Point (GSSP) for the Ordovician – Silurian boundary by the International Union of Geological Sciences.

Walton (1963) first suggested that claystones within the black shales and mudstones of the Llandovery succession at Dob’s Linn were volcaniclastic deposits. A mineralogical and geochemical study of these claystones (Batchelor & Weir 1988; Merriman & Roberts 1990) confirmed that they are metabentonites, the result of illitization of smectite due to low grade metamorphism in the region (Oliver et al. 1984). New Sr/Nd isotope and rare earth element data obtained from primary apatite microphenocysts indicate that the metabentonites originated from a mildly depleted mantle source, probably generated in a continental margin or back-arc basin environment (Batchelor & Evans, 2004). 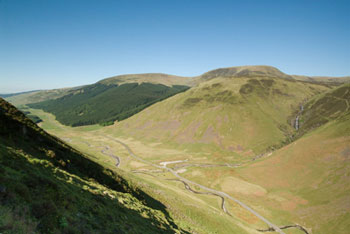 Grey Mare’s Tail Nature Reserve is situated along the Moffat Water Valley, a short distance from Dob’s Linn, in the heart of the Southern Uplands. The reserve is owned by the National Trust for Scotland and is characterised by a dramatic waterfall, the fifth highest in the UK, draining a superb example of a hanging valley below Loch Skeen and White Coomb which rises to 821m and is one of the highest hills in Southern Scotland. The waterfall again exposes mudstones and sandstones of the Gala Group (Llandovery) seen earlier at Dob’s Linn.

The post-glacial landscape is an open mosaic of heather and rough grazing that includes eight habitats of European importance and many plant species of international, national and regional significance.  The reserve is botanically outstanding, containing the richest assemblage of rare upland plants in Southern Scotland.

The area boasts a rich history – you can also see the Tail Burn ‘fort’, an Iron Age earthwork. Although it has long been known as the ‘Giant’s Grave’ it is not a burial mound, and may be defensive or perhaps even a ritual site. The Covenanters also sought sanctuary here in the 17th century.

Our visit will enable spectacular views of the fall, which cascades from Loch Skeen into the Moffat Water Valley from a rocky precipice 60m (200ft) above. On your journey through this post-glacial landscape look out for wild goats, peregrines, the elusive ring ouzel and the many locally and nationally rare wild flowers that flourish here.

The National Trust for Scotland will provide a guided tour of the waterfall area.

Walking boots and waterproof, warm clothing are essential. The path to the waterfall is steep and there are steep drops, but otherwise the access is easy.